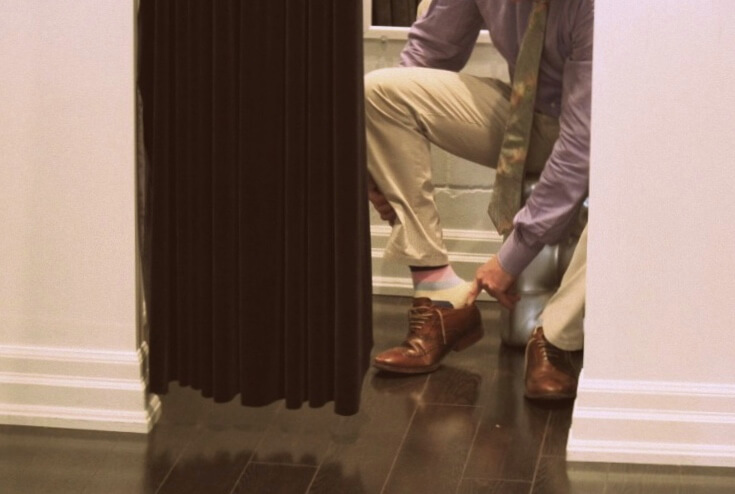 Citing findings from a recent study, www.retaildive.com brings news that spending habits traditionally associated with women are being adopted by growing numbers of men. Specifically, males these days are spending more than women on clothing and accessories; the margin of difference in spending is approaching 12 per cent, according to the study.

Now, I have to say this news is surprising to me. Men spending significantly more on clothes than women? Who knew? Truth is, I’ve never really been able to completely wrap my head around the whole metrosexual phenomenon, which is not to say I think it’s a bad thing. As a boomer rather than a millennial, I just happen to be culturally steeped in more traditional, masculine role models. As a result, peculiar images pop into my head when I try to imagine men spending like women.

Thoughts about somewhat rugged, handsome men (think an unshaven George Clooney) getting together socially for beers and poker games fall by the wayside as I imagine soft-edged fellows (think Ryan Seacrest) going on outings to spiffy clothing boutiques such as the John Varvatos store in Toronto’s swank Yorkville district, where the famed New York designer's gear celebrates rock-and-roll.

As my imagination brings the store into focus, the soft-edged fellows float through my brain, and I fantasize about what they might get up to while checking out Varvatos’ leather apparel and tight-fitting duds. I see a thirty-something guy (let’s call him Zac) trying on lots of different clothes before exiting a changing room in a cool T-shirt while a couple of his chums look on. Suddenly, the imagined figures start talking.

Zac (swivelling as he models the shirt): “So what do you think guys? … Pricey, but nice, huh?”

Orlando: “Beautiful fit, Zac. The colour works with your skin tone and I must say your pecs stand out handsomely.”

Meanwhile, in my mind’s eye I see three plainly dressed women standing nearby, impatiently rolling their eyes as the guys chat. One of them (let’s call her Zac’s wife Gail) addresses the men.

Gail (looking at her watch): “Sorry boys, but can we move things along. We still have to grab some Scotch and pick up a tank of propane for the barbeque.”

Okay, please forgive me. Just having a little fun here with the reverse typecasting. All kidding aside, what I’m trying to convey is that currently in our society we are experiencing novel changes not only technologically, but sociologically. Of course, some might argue that what seem to be new changes today in male conduct are really just echoes from the past.

Take for example something called “dandyism”, practiced largely by men in late 18 th and early19 th-century Britain and France. In simple terms, “dandies” comprised a kind of male cult of refined gentlemen largely found amongst the aristocracy but also extending to the middle class. They were colourful chaps known for their big spending on extravagant apparel. Their clothing highlighted stuff such as frilly shirts, jaunty scarves, elegant frocks, and even tight corsets allowing for sleek poses to impress the girls.

All this has got me wondering whether positive change might happen nowadays if more men adopted female sensibilities having to do with things other than just spending on clothes – things like holding debt at bay, for instance. Here I’m reminded of a Bank of Montreal study from a while back. It showed that women are far less likely than men to rack up huge amounts of personal debt – and by that I mean six figures worth of it.

It begs the question, if more credit-hungry males acted like women to avoid huge debt, would Canada be a better place with fewer debt problems, improved personal savings, and more financial peace of mind? Probably so.

Let’s just remember, we live in uncertain times. Consumer spending in our country continues to run rampant as household debt keeps climbing to astronomical heights – even in a weakening economy. Experts everywhere are warning of big trouble on the horizon, but the words seem to be falling on deaf ears.

That, I’d say, certainly is not dandy.

Money Advice: What To Do After Getting Laid Off

Do You Need Bankruptcy Or Credit Counselling?