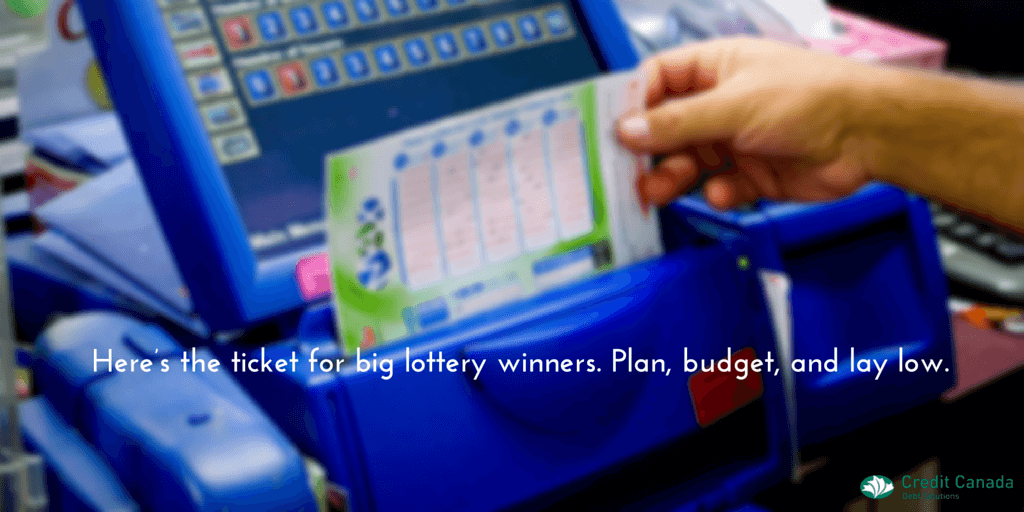 There’s so much in the news these days about big lottery jackpot winners who get the cash then lose it all in a variety of ill-considered ways. They overspend on luxuries such as houses, cars, and travel. They wildly distribute money to family, friends, and an assortment of associates (the latter often coming in the form of schemers and scam artists). Soon enough the jackpot winnings disappear like mist over a lakefront cottage with a “for sale” sign in the yard.

Why do so many big winners end up losers? The answer generally is the same. The lucky folks lack budgeting smarts and act impulsively as they fail to reach out to others who can help secure the spoils through sound financial planning and investment practices. I’ve detailed tragic stories involving some of these people in past blogs. For now, though, I’m going to zig as others zag by asking: What about lottery jackpot winners who bring wisdom to their winnings?

Dino publicly announced his prize some five months after discovering he hit it big. Why did he wait so long?

Take Dino Salciccioli, for instance. In August 2014, the 44-year-old Beamsville, Ontario man came forth to claim his winning $50-million Lotto Max ticket (that’s $50 million clear, since no taxes apply to such winnings in Canada). Dino publicly announced his prize some five months after discovering he hit it big. Why did he wait so long? Well, as he told the press at the time, he was, “Getting financial advisers in place and taking care of things that need taking care of.” He is what I would call one smart winner. There are lots of others like him.
Tom Crist, from Calgary, Alberta won a record-breaking $40 million jackpot not so long ago. He laid low as he took steps to set up trust funds that would secure his retirement and provide for his children who themselves knew nothing about his plans for months. Tom even established a fund that over time will allow him to contribute to charities and people in real need. He did so in honour of his wife, who passed away from cancer in 2012. I would describe Tom not only as a financially literate soul, but as an admirable philanthropist.

A few years back Allen and Violet won $11.2 million playing the lottery, but little changed in the lives of the two.

Then there’s Allen and Violet Large of Lower Turo, Nova Scotia, who took Tom Crist’s example a step further. You’ve got to love how this elderly couple’s last name bears on both their happy fate and the size of their hearts. A few years back Allen and Violet won $11.2 million playing the lottery, but little changed in the lives of the two. Already secure in their retirement, they kept only two per cent of the winnings for themselves, and distributed the remainder of the jackpot to family and friends in need, as well as to local hospitals, churches, the Red Cross, and the Salvation Army.
Or how about Craig Henshaw of Markham, Ontario, who won $21.4 million a couple of years back. As The Huffington Post reported at the time, Craig’s story is “one of calm and self-control. Instead of being overwhelmed by his stunning lottery earnings, he managed to keep his head above water throughout the busy first days of his win, and spent that time luxuriating in a hotel room while he planned his next move. In true teacher fashion, Henshaw has set up education funds for his nieces and nephews, helped his cleaning lady return to school, and established scholarships at UWO, where he graduated from teacher’s college in 2000.”

As I see it, winners like Dino, Tom, Craig, and the elderly Larges are well grounded as financially literate souls from the get go.

The list of wise winners goes on, encouraging thoughts about what makes such people tick financially speaking. As I see it, winners like Dino, Tom, Craig, and the elderly Larges are well grounded as financially literate souls from the get go. Certainly their big windfalls came as earth-shaking surprises to all of them. But the winnings did not alter their deep-seated attitude about money as something that always needs respect and thoughtful consideration.
I’ve no way of knowing for sure, but I suspect all these winners treat household budgeting as a serious matter. I bet that aside from their tact in dealing with the jackpots, they have always been ones to spend intelligently and frugally and to save and invest with clear-cut goals in mind. These are the fundamentals of good personal finance – practices that over time can make all of us big winners in a way since true wealth in the end is surely a relative matter.