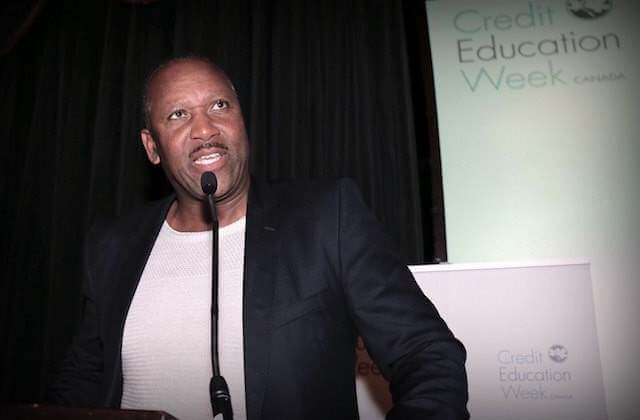 For our annual CEWC dinner gala this November, we invited baseball legend Joe Carter to appear as keynote speaker. Some beforehand might have wondered: why ask a baseball icon to speak at a charitable event devoted to financial literacy and education? Wouldn’t a celebrated money guru make for a better fit at a dinner organized for Credit Education Week Canada?

Well, in answer to such queries, all I can say is that while Joe may not be a renowned oracle of finance, he is certainly a giver of wisdom in terms of his approach to personal money management. After hearing him speak about that matter at the gala, I can only say that all his big earnings from baseball appear to have been handled intelligently and with tender loving care. That has everything to do with financial literacy.

At the podium, as he articulately shared anecdotes about money and sports, Joe discretely avoided mentioning his net worth, but I imagine everyone in the audience of 250 at Toronto’s Royal York Hotel came away from the presentation thinking that here is a smart, level-headed guy who is now a very wealthy man as he approaches his golden years, this year marking his 56th birthday.

Discretion aside (celebrity incomes are always fair game for conversation), I’ve read reports that Joe earned almost $50 million – not including money from commercial endorsements – during his 16 years as a major league player. Not bad for an Oklahoma kid of modest roots who dreamed of making a name for himself with bat and glove in hand. He achieved his dream right here in Canada when after about eight years in the major league his career soared into the stratosphere.

Unlike a lot of fame-bound folks who lose their financial bearings with newfound wealth, Joe kept his head.

For those who need reminding, Joe rose to sports superstardom after he joined the Toronto Blue Jays in 1991. As an outfielder and first baseman, he enjoyed many great moments with the team, but the most celebrated moments came when his well-timed batting, catching, and throwing skills helped the Jays win two consecutive World Series’ championships in 1992 and 1993. Joe became a huge sports hero and a highly paid one at that.

Fortunately, unlike a lot of fame-bound folks who lose their financial bearings when big success hits, Joe kept his head. In fact, as he told the audience at the Royal York, he learned a pivotal lesson in personal finance early in his baseball career so that by the time the big fireworks burst he took it all in balanced stride.

With $60,000 in hand, he spent wildly, buying a car, purchasing gifts, living large. Months later the money ran out.

The pivotal lesson came in 1981 when, as a promising baseball rooky not long out of university, he joined the Chicago Cubs through the MLB’s first-year players’ draft. He got a signing bonus of about $120,000. Half was dispensed immediately; the other half was to be paid down the road. The bonus was a hefty sum at the time, particularly for a youngster who to this point had made his way in life under his parents’ roof (among 11 siblings) and through common labour.

With $60,000 in hand, he went on a spending spree. He bought a car. He bought gifts for others. He gave cash away and lived large. But of course, after months of this behaviour, the money evaporated. Joe would have to re-join the workplace to make it through to his next big sports’ bonus payday, a major and troubling distraction from his athletic career. It was a hard lesson and one that he promised himself he would never forget.

He went on to treat money with the utmost respect, putting needs before wants and watching his spending.

He kept his promise. From then on he treated money with respect, putting needs before wants, watching his spending, and tucking expendable dollars safely away in the bank. He stuck to plan. He said that by the time he started making really big bucks in baseball, he was already well practised as a financially literate soul. He followed simple goals and rules – to keep building principal savings and investments and leave the treasure be, living only off the interest and dividends it generated.

As he spoke of this matter, I couldn’t help but think about other famous athletes who, for lack of financial literacy, lost immense fortunes. Former world heavyweight boxing champion Mike Tyson, whom I’ve written about before, came to mind. He earned more than $400 million but spent foolishly on extravagances such as mansions, luxury cars, and pet tigers. When he finally filed for bankruptcy in 2003, he claimed debts approaching $30 million.

In keeping with CEWC’s 2016 theme, Joe Carter’s way is that of big winners who become even bigger winners.

Mike Tyson’s way is that of big winners who become big losers all for lack of money skills. Joe Carter’s way is that of big winners who become even bigger winners all for having money skills. All told, Joe’s address at the Royal York was perfect in keeping with CEWC’s 2016 theme – “Financial Wins” – through which communities across Canada explored the upside of personal money management including the financial security and peace of mind that come with smart planning, goal setting, budgeting, and saving practices.

I sincerely thank Joe for his participation in CEWC’s 10th anniversary year. On stage and off – among all the guests clamouring for his attention and signature – he was charming, funny, and generous of spirit. I also deeply thank all the generous sponsors who once again helped make 2016 CEWC a winning event.

Why Canadians Need Financial Literacy Month, Now More Than Ever

How to Embrace CEWC and Become More Mindful with Your Money