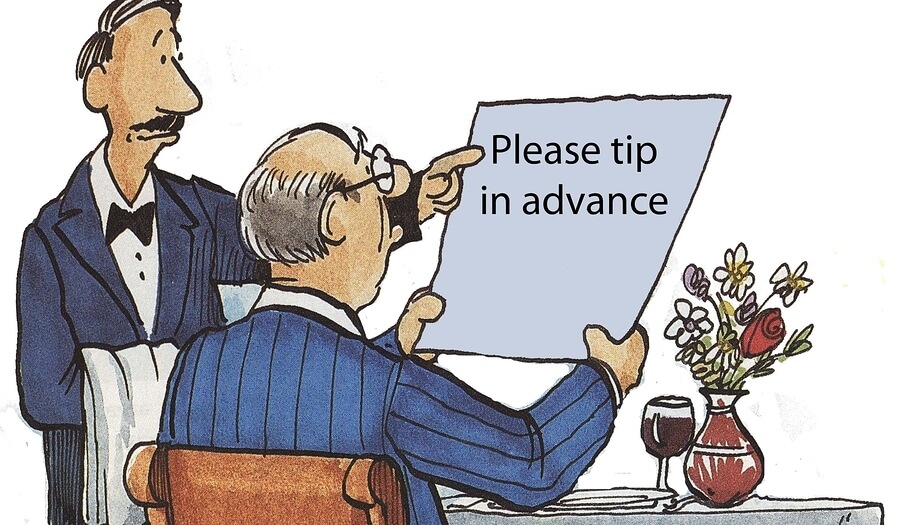 Careful. Withholding a tip could get you arrested.

To tip or not to tip. That is the question that should not be asked by anyone – however frugal – who is treated to good food and good service at a sit-down restaurant. If you’re happy with your dining experience, withholding a tip is not acceptable in my book. And the notion of reducing or withholding a tip in order to save money is just plain tacky. If a tip in any way hurts a person’s pocketbook, then that person should not be dining out to begin with. On the other hand, if the service and/or food at a restaurant is poor to bad, then customers ought to be free to reduce or withhold tips since gratuities are discretionary matters.

Indeed, any tip is by definition a donation purely and freely based on the generosity of the giver. Or, at least that’s what I was raised to believe. However, in today’s topsy-turvy world, one can no longer be too sure of anything.  Just ask the American couple who not long ago refused to tip surly waiters at a pub in London, England. After finishing a meal and paying their tab without including a gratuity, the couple attempted to exit the pub but were physically restrained by the pub’s manager and employees. When the couple refused to relent, bobbies were called, and the tourists were treated to a ticket that included a hefty fine. Evidence of their crime was spelled out in black and white - the gratuity had been automatically added to the pub bill.

Then there is the recent case of the recalcitrant young couple in Pennsylvania who withheld a tip at a restaurant because they had to wait an hour and a half for their order. Not only were they cornered by restaurant staff, they were arrested on a charge of theft and fingerprinted by police because  - again - the restaurant bill clearly showed the gratuity was part of the fee for services. The fact that thuggish staff admitted to the slow service made no difference in the matter. At the time, one member of the staff said, “We were busy. We work our butts off for low wages. Who do these people think they are?”

I have to ask myself, what are we coming to on this planet when we are compelled on a mandatory basis to thank others for giving us grief? It’s outrageous – and outright nuts. In fact, in many places of the world, including my home province of Ontario, Canada, tipping is mandatory for parties of usually six or more. In Ontario, this is in accordance with something called the Automatic Tips Act of 2010, which I understand is up for review and might be eliminated. Good thing. My thinking is, if owners and staff at restaurants believe they ought to receive more money for the services and fare they provide, then they ought to up their prices or put more effort into meeting customers’ desires and keeping people satisfied, rather than forcing them to pay more under the guise of a gratuity. Anything called a mandatory tip is a ridiculous oxymoron.

I have to ask, whatever happened to meritocracy in our society – and to pride of professionalism - not to mention the idea that keeping customers happy is the time-proven basis for growing and keeping business? From what I can see in Canada, the vast majority of restaurant goers are more than happy to shell out tips for good service and good food. It’s practically an automatic function for which there is no need for an automatic billing.

Of course, this necessarily sparks the question as to what constitutes fair tipping. The answer is that - across most of Canada at least – it is customary to tip about 15 percent on the total bill before tax, and to tip 20 per cent in exceptionally pleasing circumstances. I would label as a cheapskate any satisfied customer who tips less than 10 per cent.

Be that as it may, I have one last tip to impart to restaurant goers. Give thanks for your dinner only when thanks are in order – unless, of course, you are otherwise threatened with arrest, imprisonment, and perhaps execution.

Personally, I think you should tip only when you are satisfied with the service or food. Tip should not be an obligation, it is up to the business to adapt their prices if necessary and pay a decent wage for the waitresses / employees, so they don't need to relay on tips to survive. If I am satisfied with the service or with the food I will be a pleasure to tip for it, otherwise, I will keep my changes on my pocket.

THIS IS JUST GOOD COMMON SENSE !

You know - just for once, I would like to eat at a restaurant that had the following fine print:

We pay our staff a decent living wage, and that cost is reflected in the prices we charge. You may, at your discretion, leave a gratuity if you feel you have received excellent service.

Servers often receive less than min. Wage
In some provinces it is called servers wage. In Ontario the wage is reduced for those that serve liquor and students. I hear the complaints, but our employment law supports the idea that wait staff supplement their income through tips. Otherwise these rates of pay would be considered inhumane.

There is a reason gratuity is enforced on groups over 6. People in a large group feel more comfortable leaving a smaller tip even if the service was good. Imagine running your tushie off all night for a large party and getting a four dollar tip for your efforts on a 400 dollar bill. It happens folks, thus the policy at most restaurants.

If you do not like the way this system functions start lobbying for a higher minimum wage.