Celebrity spendthrifts who might have benefited from debt consolidation. 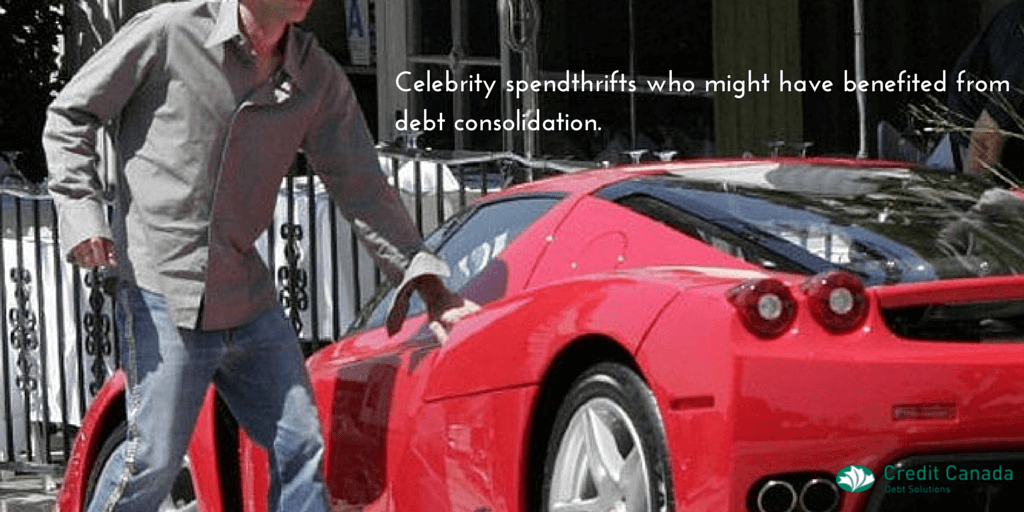 There are many stories circulating about famous folks who started out making lots of money before crashing in spectacular fashion. These people provide learning in why it is so important to respect money and develop skills in personal finance. Many of them might have even benefitted from the kind of debt consolidation services we provide through Credit Canada.

A lot of celebrities – apparently lacking altogether in financial literacy – are shameless in their conspicuous consumption, whimsically buying up things like cars and property the same way everyday people purchase candy and magazines. Status certainly must figure into the drive to spend wildly. Addictions, bad investments, and plain old hard luck also have roles to play in the riches to rags tales. But mostly, thoughtless cash outlays are behind all the trouble, along with naive notions that the celebrity gravy train will never end.

Hollywood offers a couple of astonishing stories about what can go wrong. Star actors Nicholas Cage and Kim Basinger both could have benefited from some training in personal money management and eventually debt consolidation to help with their multiple debts.

Cage had quite a successful run as  a star from the late 1980s through to recent years, making up to $20 million per movie project. But by 2007, he managed to spend his way through a $150 million fortune. Reportedly, he bought 15 properties around the world, including a medieval castle and two private islands. He got himself a Gulfstream jet, four yachts, a fleet of Rolls Royces, and all kinds of jewellery and expensive toys. Then there were the rare dinosaur eggs, the saber-toothed tiger skull, the big, live octopus, and ... well ... you get  the picture.

His spending went on and on until the  IRS at last came knocking, demanding millions in back taxes. Fortunately for Cage, his continuing bankability as an actor has helped him so far avert financial disaster. Let’s hope he has learned his lessons.

“Basinger might have considered debt consolidation to package her debt and pay it down through an affordable single monthly sum.”

Then there is the case of Kim Basinger. Some years ago, she decided to fork over $20 million in cash for a little whistle-stop town in Georgia called Braselton, near her hometown of Athens where she grew up. She had visions of building a film studio in Braselton and turning the facility into a tourist attraction. Doubtless she fantasized that her association with the project would draw droves of Hollywood producers and talent to the outback of America.

Not surprisingly, the fantasy evaporated in the harsh light of reality when Hollywood merely blinked in bewilderment and the project tanked. This investment – in combination with a later lawsuit over a movie project that she backed out of – forced the actress to file for bankruptcy. Can anyone say: try budgeting with achievable goals in mind? Before throwing in the towel financially, she might have considered debt consolidation, which would have allowed her to package her debt and pay it down through an affordable single monthly sum.

Kim Basinger and Nicholas Cage stand as prime examples of individuals in need of financial literacy training, which strongly promotes spending and budgeting practices that put hopes and dreams into realistic perspective.

The Pros and Cons of a Debt Consolidation Loan