Under the influence: Family, friends, and credit card debt. 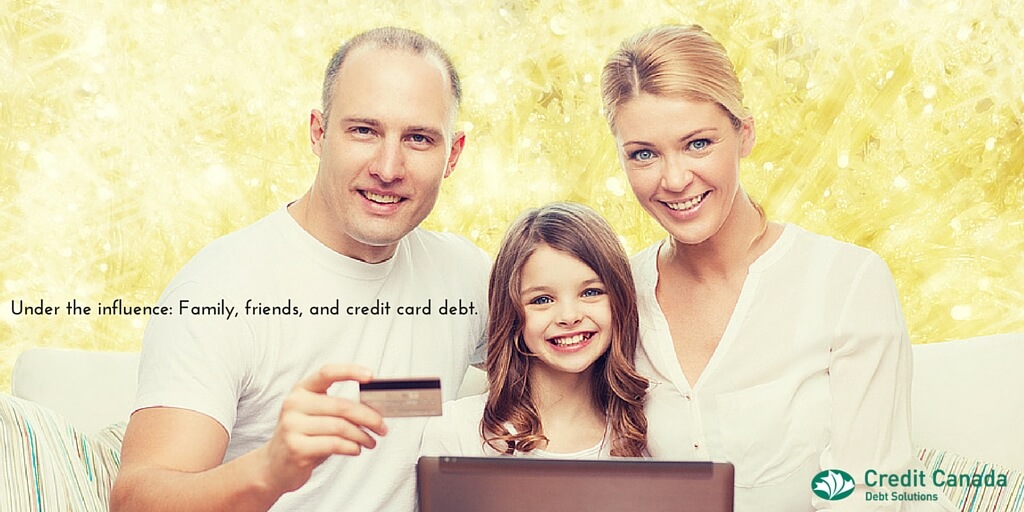 If you’re like most people, you are under the influence of others in terms of the credit card debt you create, and the spending you do in general. Family, friends, and associates hold a lot of psychological sway over the plastic in your wallet on an ongoing basis.

Relatives – mom and dad mostly – set the stage for your spending habits when you were wee and impressionable. Come your teen years, your peers influenced you big time. Then came other similar influencers perhaps through post-secondary schooling, career pursuits, and social circles.

Many people never stop to reflect on their spending behaviour and how it came to be.

Today, the question might be asked: are you fully in charge of what you are being charged? Are you fully aware of your spending patterns and their origins?

For that matter, most Canadians don’t bother to prepare written monthly budgets, which if properly set include mapping out goals that make for smart spending, saving, and credit card debt management. You might say that the majority of us in this country are winging it financially.

With household debt-to-income ratios going through the roof nationally, perhaps it’s time for some wide-scale self-reflection.

Studies show that spending behaviour is deeply ingrained in children during the formative years.

The best way to start is by examining family influencers, chiefly mom and pop. Studies show that spending behaviour is deeply ingrained in children during the formative years. Most kids essentially follow in their parents’ footsteps. So if your parents were spendthrifts or frugal types, you’re likely to follow in kind either way.

But studies also reveal that it’s not always a simple case of monkey see, monkey do with children. A significant number of kids swing in the opposite direction from their parents as time moves on. They usually do so to avoid repeating painful financial experiences brought on by the parents’ mismanagement of family finances.

Eyes suddenly can be opened to unconscious spending habits and compulsions.

Needless to say, by taking into account your family’s financial history, you can gain insight into what drives your current financial practices – a process that can be particularly helpful to people burdened by bad credit card debt. Eyes suddenly can be opened to unconscious spending habits and compulsions that, once acknowledged, can put people back on track.

At the same time, reviewing how peers have influenced you over time also can be edifying. Two factors usually are at work here: the first involves social acceptance; the second involves that old bugbear one-upmanship.

We must all at some point come to grips with growing up and becoming individuals.

At Credit Canada, we counsel a lot of people who have mismanaged finances and credit card debt simply because they are trying too hard to fit in among peers, or because they are driven to outdo others through a show of status. Especially nowadays, we see this sort of behaviour at work through social media networks.

To my mind, these matters beg a few simple words of wisdom. We must all at some point come to grips with growing up and becoming individuals. We must all make an effort to act as independent souls, judging ourselves by our own heartfelt desires and standards, rather than the wants and values of others.

We need to be our own influencers.