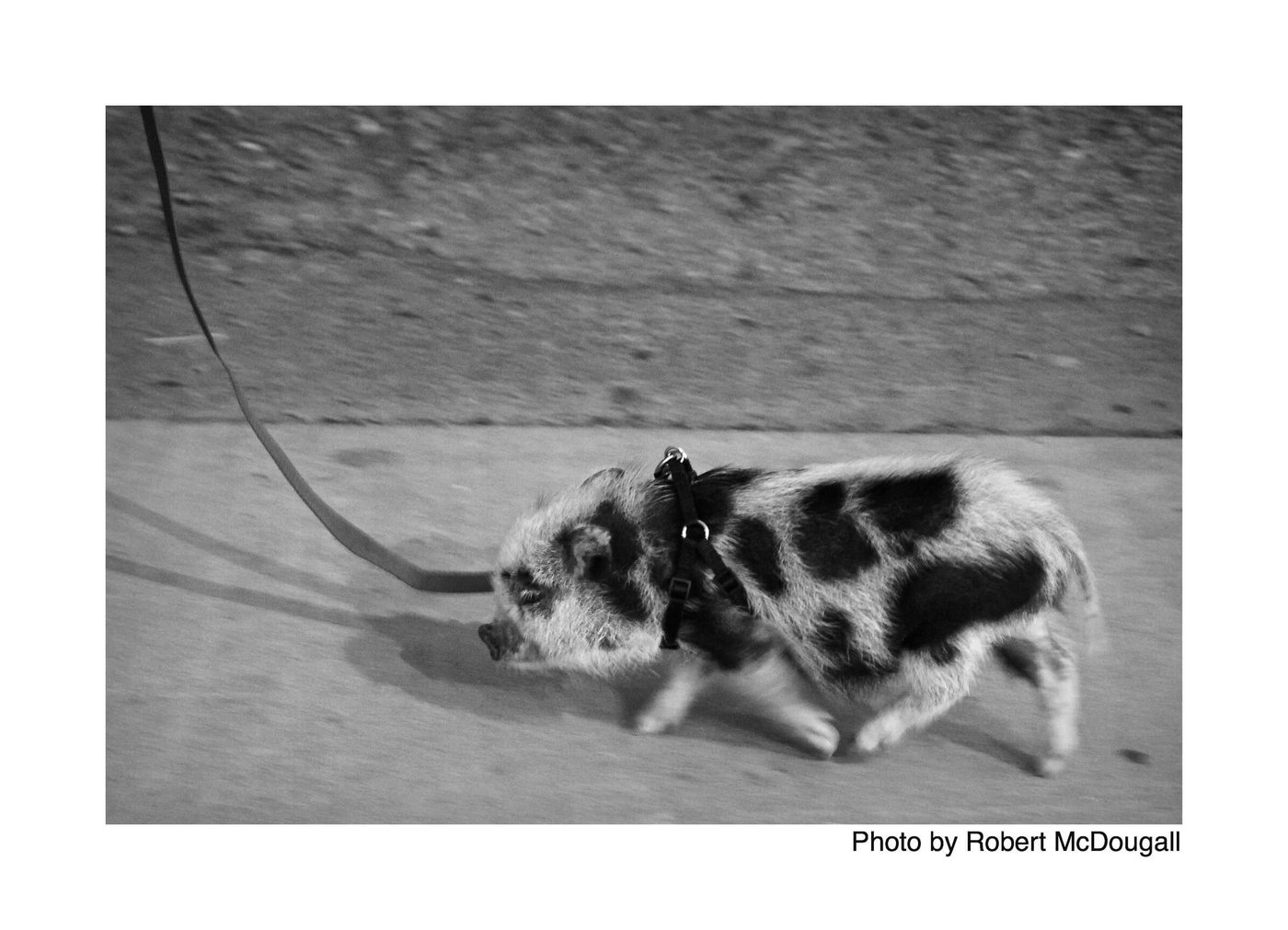 What would you spend to save your pet? More notes on debt management. 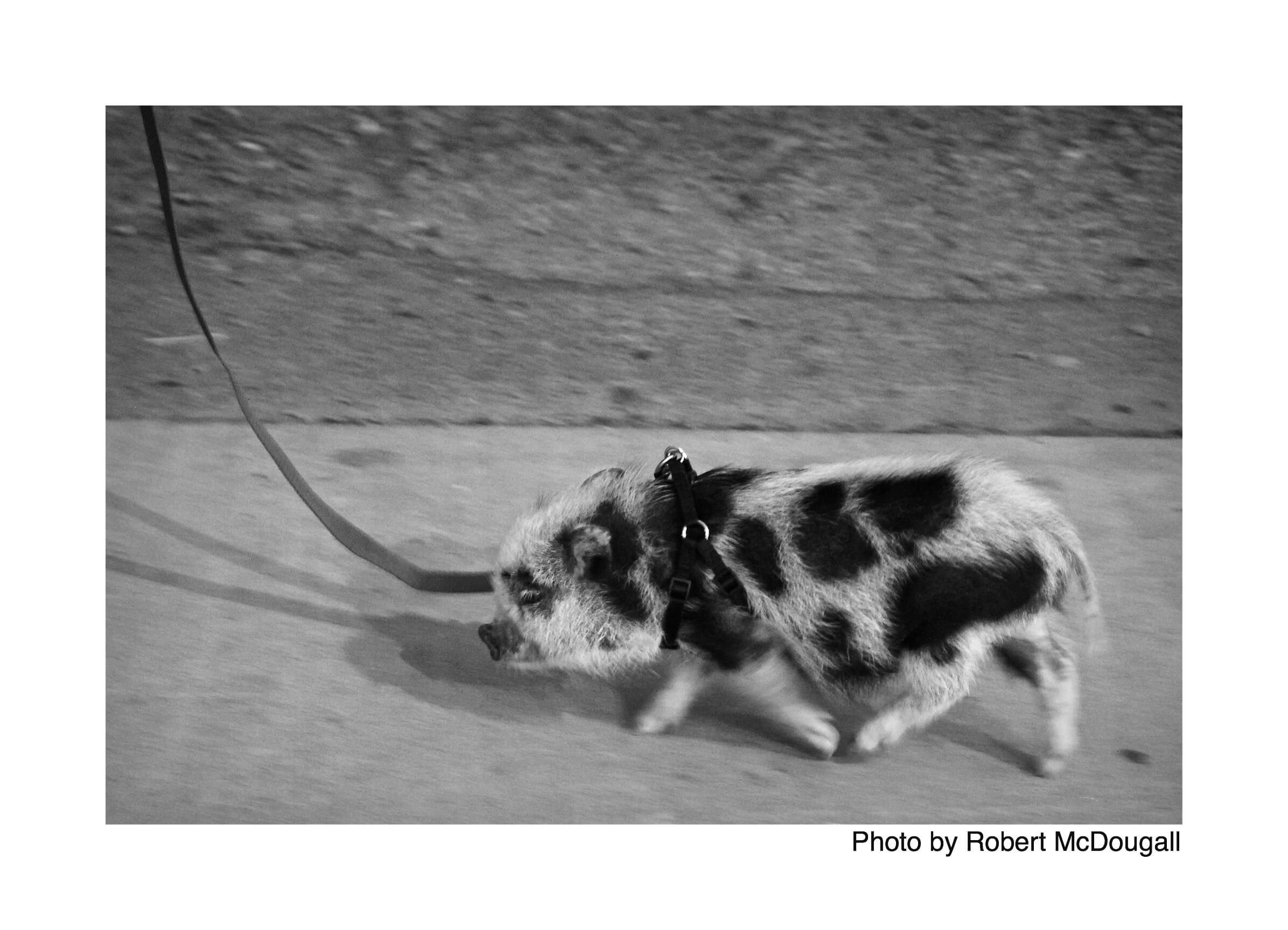 The online ad read: “Reserve your miniature piglet now! Just $875 to $1,200 ($100 deposit required).” Under the banner headline were all sorts of photos of adorable little oinkers, some pink and smooth as a baby’s bottom, some fuzzy and spotted, others furry or what the seller called “shabby chic.” There was Pedro, Natasha, Little Tuxedo, Juliet, Pluto – on and on. I ruminated over one furry photo in particular. A weeks-old little guy named Patches practically stole my heart, his innocent, deep-blue eyes looking imploringly to camera as he rested in the arms of his breeder. “Please give me a home,” Patches eyes seemed to be saying. “All I need is your love, a pillow, and a little food. I promise not to grow much bigger than I already am.”

Tempted as I was to give him a home, I didn’t cave. Well, I couldn’t. I’ve a dog in my family and I’m not at all sure how Daisy would react to a miniature piglet entering the home turf. Though Daisy is friendly towards humans and her own kind, I wondered would she perceive Patches as a strange interloper and in a fit of instinctive, territorial jealously take after the wee thing? Visions of a terrorized, squealing piglet entered my head and I immediately dismissed all fanciful notions about Patches joining the family. But it didn’t stop me from doing a little research about miniature piglets out of general curiosity. High maintenance and often highly temperamental, the creatures can be quite a handful, I learned. Most interesting to me as a credit counselling specialist were the costs associated with owning one of the animals. The spectre of debt management gone awry suddenly raised its less than cute head.

Looking at the costs, I saw how a miniature piglet could easily muddy the debt management plans of just about any average wage earner in Canada. The tiny oinkers require much more than love, a pillow, and a little food, as Patches might have it. In his case one would probably have to figure in up front costs as follows:

• $250 or more for neutering just on the off chance that Patches encounters a sexy little female piglet (low probability but better safe than sorry);

• $300 or more for a piglet house and special fencing;

• $400 or more for a decent piglet travelling crate (short trips only to the vet and maybe green space);

Then there are Patches’ ongoing maintenance costs:

• $500 annually for feed with added portions of fresh fruit and veggies where there’s no grazing;

• $30/day pet sitting costs (for various reasons, long distance travel with a miniature piglet is out of the question);

So it turns out that for ownership and basic care and maintenance, Patches would cost a pretty nickel from the day he’s purchased until the day he passes on some twenty years later. I calculate a piglet lifetime cost of somewhere around $35,000 provided Patches lives out his years in reasonably good health.

But here’s the financial clincher with Patches and his micro brethren. The piglets are not only highly temperamental, they also are highly prone to odd ailments often requiring emergency medical attention as they age, including surgery costing $2,500 or much more. Mulling over the figure, I wondered what I would do if I were Patches’ owner in such an emergency? Certainly, I’d give serious thought to my debt management situation. But how might that sway my decision making? If wee Patches was struggling for life, waiting for surgery that would assure him more years on Earth, could I look into those adorable blue eyes and say to him: so long tiny, you’re on your own now? It’s tough to imagine. What’s easier to imagine is rationalizing the medical expenses in comparative financial terms – “I’ve already spent so much on you over the years little guy; what’s another twenty-five hundred dollars?”

Yes, dear reader, this is what the love of a pet – even the imagined love of a pet – can do to a person. And I’m hardly alone in my sentiments even if they fall only within the realm of speculation. Truth is, many pet owners of average income claim they’re willing to spend a lot to save their beloved animals. Surveys about the matter are limited across North America. But one Associated Press-Petside.com poll from not so long ago found that 22 per cent of pet owners said they would be willing to pay a medical bill of up to $5,000 to save their pet. That’s no small potatoes for many millions of families of average means. Indeed, in many if not most cases a sudden bill of this nature would add significantly to debt problems. Still, it’s one thing to imagine what one might spend on a pet in peril, and quite another to actually deal with the emergency.

I throw the challenge out to anyone who owns a pet. Take a quiet moment to sit with your beloved friend and look into his or her eyes. Ask yourself what you would do if suddenly the animal required emergency medical attention that might cost you plenty but that would certainly save your pet’s life. What would you be willing to spend? Try to be honest – and realistic. You might have to imagine summoning courage.

In the meantime, maybe think about gradually building a rainy day fund not just for family emergencies, but for furry ones too.