Is Your Favourite TV Character Deep in Debt?

Ever wonder whether your favourite sitcom character can actually afford their lavish TV lifestyle?  Let’s take a look at some examples from TV past and present to see how much debt is likely hiding under all the glamour.

How did Carrie Bradshaw from Sex and the City manage to pay rent in a charming Manhattan apartment and support a shoe addiction on a newspaper columnist’s salary?  According to this article on savvywriters columnists typically receive $50-$100 per piece, even on the high end of the scale, Carrie would receive $2,000 a month for a daily column; and that’s before taxes!  Assuming she earns another $500 in some royalties from other published work bumps her monthly income up to $2,500.   I’m guessing those regular brunches with the girls and drinks at fancy nightclubs put a toll on her credit card.

If Carrie Bradshaw walked her Christian Louboutin pumps into my office, my advice to her would be to take a hard look at her budget and make some major changes.

Seems like perhaps a case of keeping up with the 'Samantha Jones’.  Samantha was a marketing guru with high end clients, Miranda a lawyer, and Charlotte was able to leave the work force after marrying her wealthy first husband.  Yet we never heard about Carrie’s financial struggles throughout the series; only her dating woes.   Considering a one-bedroom apartment in her neighbourhood will set you back at least $2,000/month (not to mention her walk in closet!) I estimate that Ms. Bradshaw would spend at least $3,500 a month on living expenses in New York City, leaving her with a hefty credit card balance and possibly a line of credit to compensate for her lavish lifestyle.  If Carrie Bradshaw walked her Christian Louboutin pumps into my office, my advice to her would be to take a hard look at her budget and make some major changes.  She could get a day job, sell some of her old clothes and shoes (putting a few pairs of shoes on Kijiji at $500 each could make a real dent in her credit card balance), or consider getting a roommate and reduce her entertainment expenses significantly. After all, a quiet movie night at home with the gals or dining in instead of fancy bars and restaurants would surely help.

For restaurant chef, Monica, earning $45,000 a year and waitress, Rachel, earning $8-$10 an hour, they must be racking up major debt to keep a space so big you can do gymnastics.

Then there’s Rachel and Monica from Friends.  Again, New York City is very expensive and this classic sit-com gives the impression it’s easy for a café waitress (the early years of the show anyways) and a restaurant chef to live in a large Greenwich Village loft.  Even sharing the rent is a stretch.  According to real estate website Zillow, this beautiful space would cost about $3,500-$7,400 a month!  For restaurant chef, Monica, earning $45,000 a year and waitress, Rachel, earning $8-$10 an hour, they must be racking up major debt to keep a space so big you can do gymnastics. Rachel no doubt had a family trust fund but she likely wouldn’t have access to it yet and she gives the impression she doesn’t want to depend on her family’s money for support.  Monica is an organized planner by nature and thus it surprizes me that she would not have a panic attack at the sight of her income vs expenses on her budget.   These two clearly need to scale down in size and possibly relocate to a cheaper part of the city.  Later in the series, Monica gets a promotion as head chef and Rachel moves up from Central Perk to Ralph Lauren but before these advancements they were 100% living beyond their means. 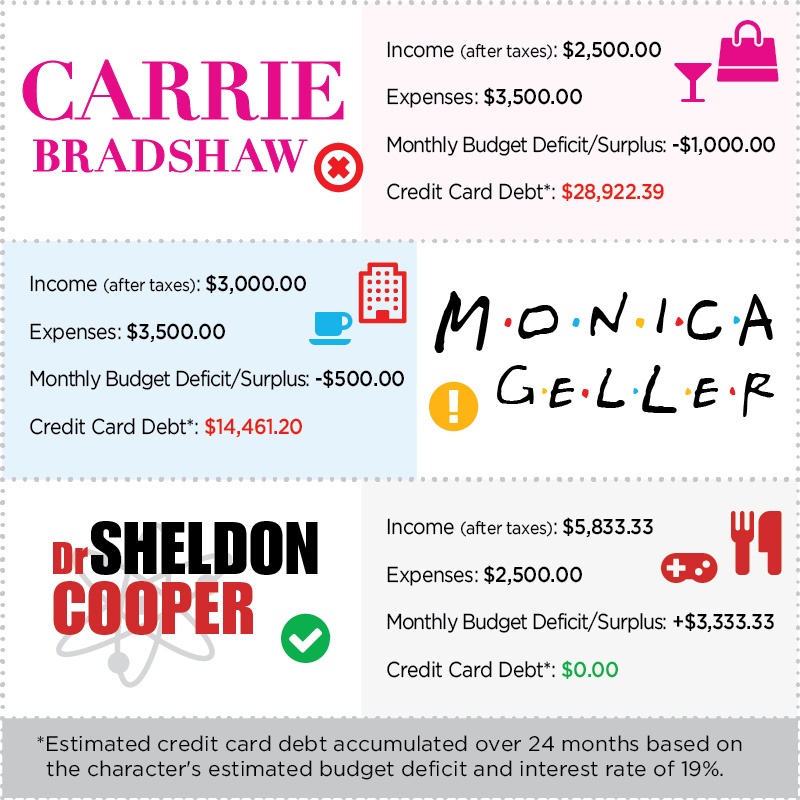 The characters from The Big Bang Theory, however, seem to stay on budget and then some. Sheldon would likely take home $100,000 as a theoretical physicist at Caltech and although he spends a lot on comics, take-out and t-shirts, his expenses are reduced by sharing a presumably cheap flat (as there is no working elevator) with friend, Leonard. Howard too has a substantial income at roughly $103,000 as an aerospace engineer and he still lives at home with his mother!  Where does the bulk of their income go I wonder?  It’s possible they are still paying down student loans and helping with family expenses and debts, otherwise that’s a lot of action figures! Hopefully Sheldon and the gang have the foresight to contribute to retirement savings and hold an investment portfolio.  They seem like smart fellows, anyways.

So next time you sit back and turn on the telly, take your favourite characters and their living situations with a grain of salt.  It’s almost impossible to live up to these fictional characters who appear to be living the dream.

Kerri is a dedicated credit counsellor with Credit Canada. She has been called the Mary Poppins of debt and loves to share her budgeting and money management ideas with others though her blogs.
See More Posts