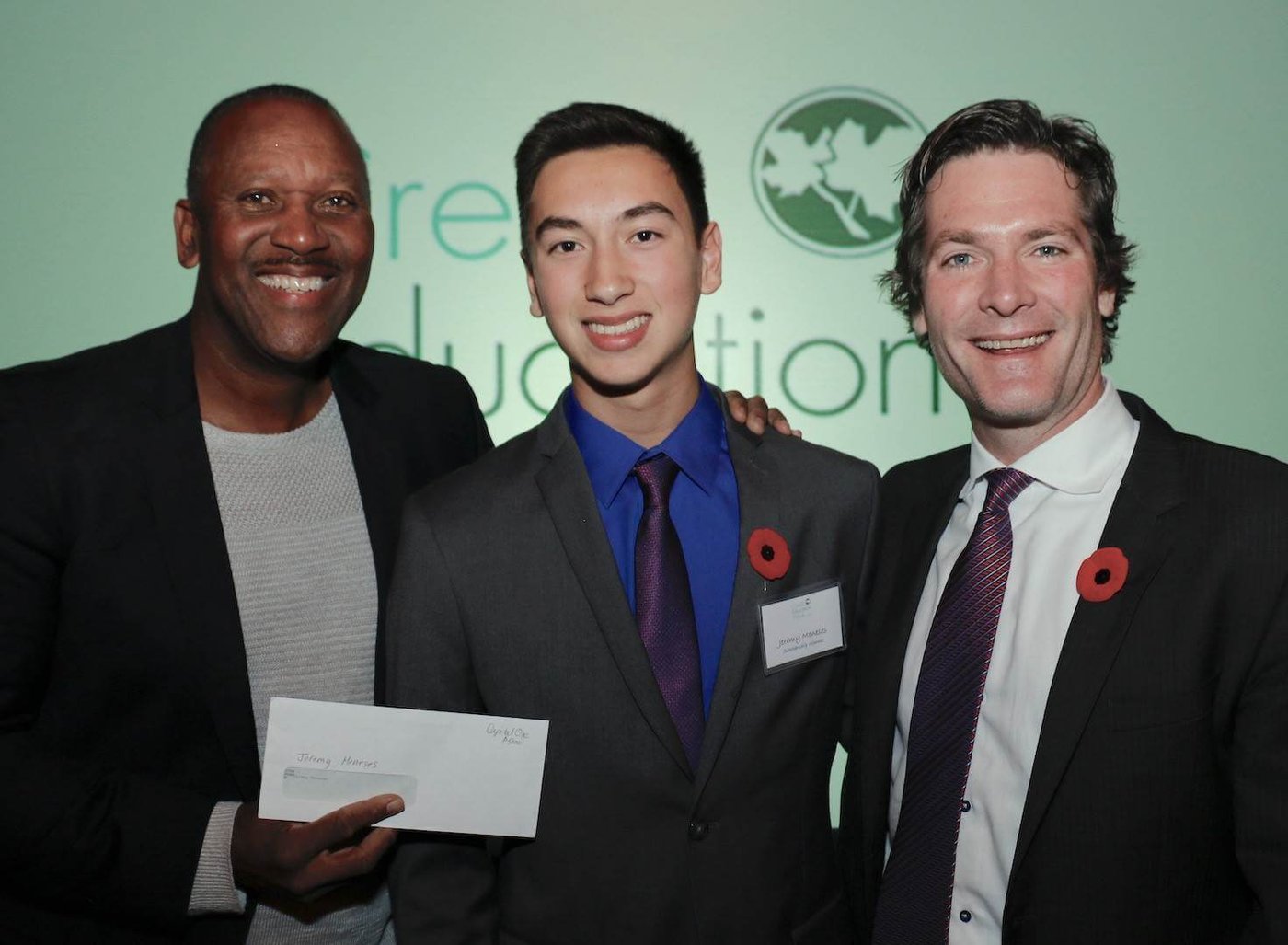 Winner of the 2016 CEWC Essay Contest

Jeremy Meneses, of Georgetown, Ontario, between baseball legend Joe Carter and Capital One Canada’s Brent Reynolds. Jeremy won the grand prize of $5,000 in CEWC’s High School Student Essay Contest where students were asked to write about the dumbest thing they ever did with their money and what they learned from it.

Here is the Winning Essay:

Some might say I was troubled as a child. Others would say my stray energy needed some direction. My mother just so happened to be one of said people. At the start of my second grade school year, she decided to give my brothers and I something to work towards. One day she brought home three empty shoeboxes and placed them on the kitchen table. She explained to us that this would be the start of a beautiful friendship, between money and us.

My mother explained to us that these were our savings boxes. We were to wrap them in pretty paper to seal them, and put a hole in the top. Every time we earned money it was to go straight inside. She told us to choose something that we really wanted and once we had saved up enough, she would take us to the store with box in hand to purchase our wish. We all got very excited with the idea. We felt like big boys, being able to buy whatever our hearts desired all by ourselves.

My box was by far the best. It was magnificent, positively glowing! Well… until the glow sticks stopped working. I double taped the sides, and triple taped the top, trying to make it as hard to get into as my mom’s new cookie jar. The hard part wasn’t making the box, or even saving the money, but was finding the right thing to save for. Both my brothers had this figured out, and I knew mine had to be better than the both of their’s. My younger brother was set on a motorized scooter he had seen on TV. My older brother wanted a pair of headphones so he could tune us out. I however, wasn’t going to waste my wish on such mundane objects as these. I finally decided upon a bike, but not just any old bike. I wanted the Supercycle Moonrider with fire red training wheels. It was THE bike to get, with flames shooting down the side and five different gears.

It wasn’t hard for me to save my money once I had a goal in mind. I started straight away, lifting up couch cushions and rifling through my dad’s dirty laundry. Every spare coin I “earned” went right into my box. I decided this wasn’t enough so I created a lemonade stand, sold flowers to the neighbours, and set up a Compliments stand. I got good at it too. You’d be surprised how many people would be willing to pay a whole dime just for me to tell them their shoes go well with their hair.

Weeks turned into months and my box grew heavier by the day. Not once did I peek inside. When summer finally came I figured I must have enough to buy a house! My box was so heavy it hurt my arms just holding it. I begged my mom to take me to the store until one day she finally agreed. Hugging my box tight to my chest, I climbed into the car. I was beyond excited to finally be so close to opening my box and getting the bike I had been dreaming about. When I jumped out of the car, I started to walk as fast as I could to the store. I had waited so long for this moment! I marched valiantly in through the doors, chin held high. After two minutes my eyes fell to rest upon the bike that I had been longing for. I couldn’t hold my excitement. It looked so majestic resting there between its obvious inferiors. As my mom brought it up to the front, I heaved my box up onto the counter, shocking even myself with the loud THUMP it emitted. I ripped the top open with great enthusiasm, proud to show off my savings to both the cashier and my mom. With that tearing of paper my heart sank. I gazed with horror upon the scene that lay before me. Inside this box that had held my hopes and dreams for so many months lay not the piles of treasure I had imagined, flowing over onto the counter, burring us all in a mountain of riches. Instead lay a note atop five great big rocks. The note read:

“Jeremy, sorry I took your money, but I broke mom’s cookie jar and had to buy her a new one before she nottisd notis nottiss saw, please don’t tell, or be mad, will pay you back. Love Matthew (PS this one is easier to open)”

I was dazed, then angry, absolutely fuming! But above all, I was embarrassed. What did people think of me? Some prankster trying to buy a bike with rocks! I just wanted to get out of there, run straight to the car and never show my face in public again, but of course there’s no running in parking lots.

That day may not have been the happiest of my life, but it taught me some of the most important lessons I’ve learned. Firstly, I don’t like rocks. I also learnt of the importance of managing your spending. I had saved up for a long time and would have been able to buy what I wanted; whereas my younger brother, Matthew, had been unable to manage his spending, using his money as well as mine, causing him to be far from reaching his goals. I learnt how good it feels to be able to have spending money and that it was valuable to work hard to achieve that. Another thing that I learnt that day was the importance of keeping your money safe. It’s not wise to leave it lying in the open, unchecked. I realized that I should not have measured the amount of money I had from the weight of my box. I have, from then on, been aware of what I have so that I don’t accidentally come into possession of any more “rocks”.

The $5,000 grand prize from the 2016 CEWC Essay Contest will help Jeremy pay for University.
Learn more about Budgeting for University here:
https://creditcanada.com/blog/budgeting-for-university